The Box was of some very hard wood of a dense grain. It had been covered with shagreen, but the shagreen was black with age and sometimes worn away so as to show the wood beneath. Both wood and shagreen had been polished until they were as smooth as a polished metal.
— From Chapter Four, The Box of Delights

I now offer here what’s planned as my final thoughts on John Masefield’s fantasy The Box of Delights, though one shouldn’t say anything is actually final where thinking is concerned. These thoughts will focus on magic, on time and on space, and not just because these aspects are interconnected.

When I consider the magic in the novel I think of the materials — the Box itself and the Elixir of Life, principally — and the types of magic that seem to manifest in the narrative. In terms of time and space I want to highlight when exactly Masefield sets both this story and its predecessor The Midnight Folk, and where geographically speaking he imagines them happening.

“On one side of [the Box] there was a little counter-sunk groove, in the midst of which was a knob,” Kay discovers. “Then he saw that the groove was inlaid with gold and that the golden knob within the groove had been carven into the image of a rose-bud, which was extraordinarily fragrant.” Whether this scent is of a rose, or of the cinnamon wood the Box seems to be made from (“the wood the Phoenix builds in”) isn’t clear.

Inside the Box is what Kay takes to be a book, the effect given that “of staring into an opening in a wood” (which reminds me of the recent artform known as book sculpture, with pages carved into faces, figures, objects and abstract shapes). Masefield seems to be describing a vintage tobacco box covered in coarse leather, shiny with use. Perhaps when originally filled with flake tobacco it would remind him of tree trunks, of bark, of the pages of a book, with a rich exotic aroma.

When I recently came to reread this novel I was struck that Kay’s Box was in effect a kind of miniature TARDIS, the Time and Relative Dimension in Space vehicle used by Doctor Who to visit different timelines and universes. At the press of the golden knob Kay like the Doctor can also telescope both time and space by going ‘swift’ or ‘small’; and by opening the box he can travel into an alternative dreamlike dimension, even taking companions with him, as the Doctor does.

You may, incidentally, remember that Patrick Troughton, who played Cole Hawlings in the 1980s BBC television series, had been the Doctor’s first reincarnation.

As to types of magic, I postulate that there are principally three in this novel. Natural Magic, the old nature-based kind that gives rise to Herne the Hunter, the Oak Tree Lady and talking animals, is one. Then there is what we might term Unnatural Magic, brought about by the proto-scientific investigations pursued by the likes of Ramon Lully and Arnold of Todi to produce the Elixir of Life and the Box, or alternatively used and abused by Abner Brown to achieve entirely selfish, even criminal, ends. This is possibly the magic that allows Cole to enter the painting of The Dents du Midi from the North and escape the wolves (a copy perhaps of Gustave Courbet’s 1877 painting Panoramic View of the Alps, Les Dents du Midi, now in the Cleveland Museum of Art).

Finally there is the Innate Magic that Masefield imagines for Kay Harker in both The Midnight Folk and The Box of Delights, the ability to access both kinds of magic through the power of the imagination. Cynics might suggest it comes from the soporific effect of smoking strong pipe tobacco, possibly inducing vivid dreams which telescope time and space, but I demur and utterly dissociate myself from this point of view… 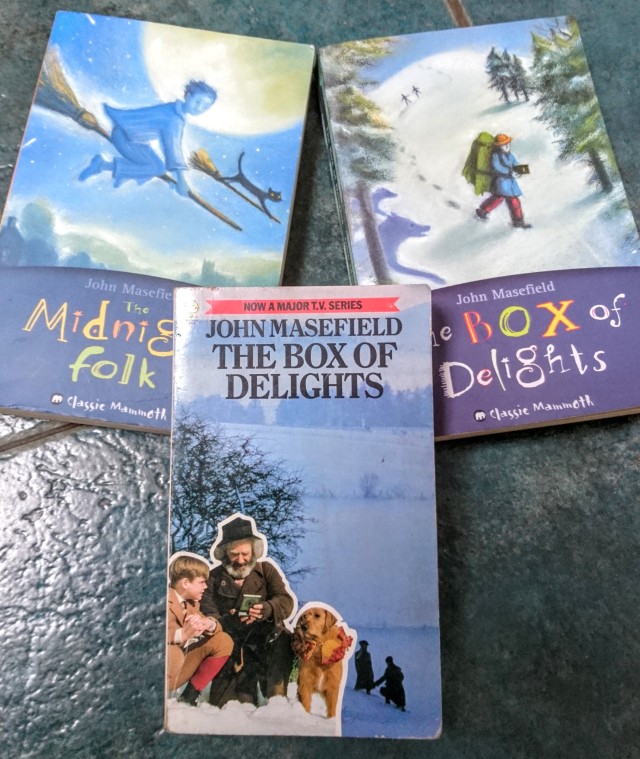 I now come to timelines and places.

The two Kay Harker novels are to some extent autobiografiction, that awkward term devised to describe the fictionalising of autobiographical elements in a novel. Masefield clearly inserted experiences, people and places from his own life into the two fantasies; though often in contradictory combinations it’s still possible to see where some of the themes may originate.

Masefield was born in 1878 in Ledbury, Herefordshire. His mother Caroline Louisa — née Parker, to rhyme with Harker — died in 1885 giving birth to his sister, and when his distraught father was placed in an asylum (where he later died, in 1891) John and his siblings were given into the care of Katherine Eliza and William Masefield, their aunt and uncle, who moved them from The Knapp to their own home The Priory, closer to the town centre.

Kay Harker’s home The Seekings could well be a compound of The Knapp and The Priory, though Kay’s ancestral home is older and grander than either. His unsympathetic aunt and solicitor uncle could function as the models for Pouncer the governess and Sir Theopompous, his first guardian in The Midnight Folk until the appearance of the goddess-like Caroline Louisa. Masefield seems to be rewriting history by having his mother as still living and edging out the stern relatives who didn’t think poetry and fiction was a suitable career for the son of a solicitor.

Now, from internal evidence (a key date is 1850, “thirty-five years ago”) Kay’s age in The Midnight Folk appears to be seven, with the narrative set in the summer of 1885, when in fact Masefield was himself seven years old. However, by the time of The Box of Delights the action seems to have moved on half a century to late 1935, the year the novel was actually published. Kay is now probably 10, returning from his first term at boarding school, a clear memory of the three years Masefield spent at Warwick public school (1888-91), an institution which he loathed.

By the way, I’ve suggested elsewhere that Kay’s end-of-term return home in the run-up to Yuletide may be viewed as a kind of early Twelve Days of Christmas, because independent schools traditionally break up around two weeks before the Great midwinter festival. Though the twelve chapters don’t in any way parallel the twelve days leading up to the 25th December I wonder if Masefield is unconsciously evoking the traditional song (which, of course, really refers to the period between Christmas and Epiphany).

Now to places. I’ve already posted sketch maps based on Ledbury, which overlaid fictional sites onto actual geographical features. Masefield changes the occasional compass direction, notably when placing the Chester Hills on the left of the railway line heading towards Condicote when in fact the Malverns would be to the right on the route from Worcester to Ledbury. I also fancy that Arthur’s Camp, a mile to the west from Condicote, is based on the Malvern hillfort of Midsummer Hill, which is actually a couple of miles to the east of Ledbury.

But Herefordshire is not the only ‘borrowed’ geographical entity: the description of the hustle and bustle of the canal dock by the Lock & Key pub is more appropriate to Liverpool, where Masefield aged 13 went to become a naval cadet on the training ship. HMS Conway. All the seagoing escapades are based on his own three years as a cadet, followed by a disastrous voyage rounding Cape Horn and a later voyage to New York, where he jumped ship.

Other significant borrowings came from his later life when he lived at Hillcrest in Boars Hill, Berkshire (Oxfordshire after 1974). Sited between Oxford and Abingdon, Boars Hill has a handful of sites that jostle for our attention. While the surviving Dingle Cottage was actually the dwelling for the author’s gardener (and where his fellow writer Robert Graves stayed for a while) the nearby artificial Jarn Mound, begun in 1928 and completed by 1931, could conceivably have partly inspired the Wicked Hill in The Midnight Folk (1927), where Abner Brown and his witches held their coven. About a dozen miles SE of Boars Hill is the village of Crowmarsh Gifford from which I fancy Masefield borrowed the name for the Crowmarsh estate which in The Midnight Folk lay adjacent to The Seekings.

Meanwhile, one of the possible models for the Chester Hills theological college of The Box of Delights may also be found in Boars Hill.

In 1933 Masefield would have heard that nearby Gothic revival Foxcombe Hall had become Ripon Hall theological college, and would soon have been familiar with the sight of trainee clerics in the vicinity; the hall on Foxcombe Road, leading to Fox Lane, may even have later suggested the foxy-faced cleric Charles. The faux medieval buildings and stone tower no doubt offered a vision of how the novel’s college may have appeared.

But an equally impressive lakeside building takes us back to Herefordshire. Midway between Ledbury and Midsummer Hill is the grand 19th-century Eastnor Castle. Masefield, if Kay’s cycling map is anything to go by, must have been familiar with this, as with other sites in the vicinity, from cycle rides; in fact it was actually used as a location for the 1984 BBC TV series, a stand-in for the Chesters college. With its imposing façade and nearby lake it’s the perfect vision of Abner Brown’s headquarters.

Speaking of Abner Brown: the fact that, when spotted walking in the Chester Hills, he’s mistaken for the Bishop of Tatchester — a doppelgänger almost — is a reminder to us readers that almost everything in this novel is not as it seems — neither times nor places, people or animals. Just as Captain Hook in Peter Pan is somehow also Mr Darling, the predatory wolves and bloodthirsty sea wolves (or pirates) are stand-ins for Kay’s adversaries; they are typical of figures in dream sequences which are nearly always symbolic of something else.

In The Box of Delights we may nearly always need to look at what’s below the surface to find the truth of the matter.

I could, and should, say much on other aspects of the two Kay Harker books — the nature writing, say, or the poetry ranging from doggerel to the more sublime — but I haven’t gathered my thoughts about them yet. Maybe they will be brought together sometime. Or possibly not.

9 thoughts on “A box of dreams”