A woman stands in front of an oval mirror. She is seeing if a shawl she is trying on suits her. She has been standing there for more than a century — since 1910 in fact. And I too have stood for a long time looking at her looking at the looking glass, in which I wasn’t reflected.

The Mackerel Shawl was painted by Algernon Talmage (1871–1939) and has been hanging in Bristol Museum & Art Gallery since it was acquired in 1913. Whenever I visit the gallery I am often drawn to it, but have not really thought why. Until now.

For it has stories to tell, and I want to tell you what it has told me.

Like all hypnotic images there are layers and layers of meaning, of symbols, of emotions. For example, though the unknown woman seems to be checking out how she looks with the shawl — is she at home? in a shop? at a friend’s house? — a closer glance shows she is looking directly at the viewer, whether at the painter himself or at gallery visitors.

What is that look? Does it appraise? Does it reveal anxiety or confidence? What can the uplift of the chin tell us about her mood? Is she bored with ‘sitting’ for the portrait or is she revelling in the attention? It’s so hard to tell mood and attitude from her glance or her stance, but it’s what we are primed to do, to assess if someone is friendly or not.

Now, the mirror itself is a staple of stories and of narratives conveyed by their appearance in paintings. We are reminded of the fairytale motif “Who’s the fairest of the all?” and of Alice going through the looking glass. Of the non-appearance of vampires in mirrored surfaces. Of the Arnolfini portrait by van Eyck, of Las Meninas by Velázquez, and a host of other enigmatic paintings and images where artists and viewers reflect on why their image is not reflected. (Or, in the case of René Magritte’s Not to Be Reproduced, disturbingly why only the back of the sitter’s head is seen by him in the mirror.) 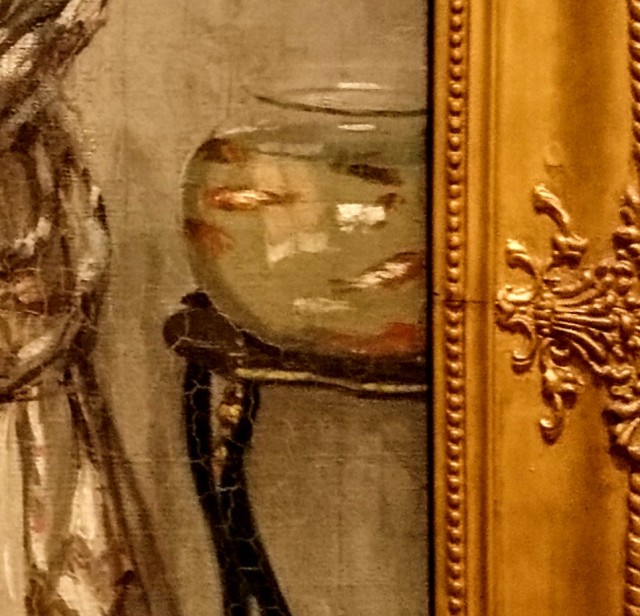 But there’s more to The Mackerel Shawl. You’ll have noticed there’s a goldfish bowl on the table to the right. In it is reflected the window we can see also reflected in the oval mirror — but there is nobody reflected in the convex surface. What we do see are the many fish swimming around and around the bowl, and they of course echo the indistinct fish shapes referenced in the title of the painting.

Are the goldfish a metaphor for our human lives? Maybe. But our attention is now drawn to the mackerel shawl itself: to the net-like gauze in which the fish shapes are caught, to the way the material flows down the sitter’s silk dress like a waterfall to the floor, how the shawl merges into the shag pile of the carpet like a cascade joins a pool.

But the carpet isn’t a fishy pool: though the pattern isn’t clear it appears more like grass or fallen leaves, and this vegetation motif is echoed by the net curtains with their flowery shapes, behind which is the fainter blush of what could be a rose.

What, if anything, does this all mean? What might the barely discernable embossed shields on the wallpaper signify? Of course this could merely be a late impressionist study of what Algernon Talmage actually saw in front of him, with no ulterior motive on his part: as the Art UK note has it, the portrait shows what appears to be “a dressmaker’s shop where a woman is trying on a new dress and shawl. The shawl is in a fine gauze fabric, with perhaps silver thread embroidery.” And that’s it. No mystery to see. Move away, please.

And yet I can’t help but remember the impact one of Tennyson’s poems, The Lady of Shalott, had on Victorian artists. In that poem the fairy lady cannot look out of a window at real life but is cursed to view things reflected in a mirror and weave them into a tapestry.

She knows not what the curse may be,
And so she weaveth steadily,
And little other care hath she,
The Lady of Shalott.

But she becomes “half-sick of shadows,” and, fatally, looks out of the window at Sir Lancelot riding by.

The mirror crack’d from side to side;
“The curse is come upon me,” cried
The Lady of Shalott.

She goes down to the stream, lays down in a boat. As she floats downstream to Camelot she sickens and dies from the curse.

William Holman Hunt was just one of many Pre-Raphaelite artists drawn to the theme: he painted this version of The Lady of Shalott in 1905. But while Holman Hunt’s sensibilities drew him to paint romanticised medieval themes, Tolmage’s impressionism only admitted more contemporary subjects, depicted in more muted tones. And yet, and yet…

Am I foolish to see in The Mackerel Shawl, painted only five years later, a nod to the ill-fated Lady of Shalott? For here is the mirror not yet “crack’d”, the window with net curtains hiding passers-by, the allusion to a stream and its fishes, the coats of arms on the wallpaper, and the shadow of the woman — and only hers — thrown onto the carpet and wall.

As she gazes at us in the mirror is she about to turn and see us in the flesh?

Postscript on the Lady of Shalott

The first two titles have a substantial section or chapter on artists such as Holman Hunt, Rossetti, Elizabeth Siddal and Millais who dealt with the Lady of Shalott theme (first published by Tennyson as a poem in 1832 and revised in 1842). The Lupack title only gives passing mention to the theme but gives space to a range of artists spanning the 19th and 20th centuries.

Elizabeth Prettejohn. The Art of the Pre-Raphaelites. Tate Publishing. 2007: 223-231 ‘Ladies of Shalott’

44 thoughts on “The mirror not yet crack’d”