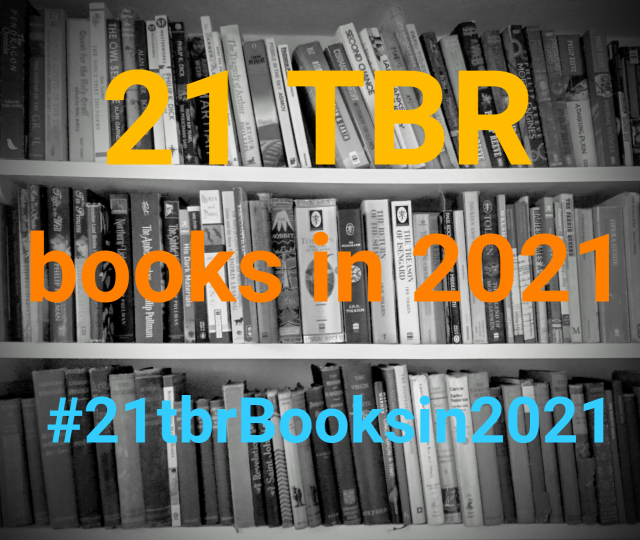 The end of March, and a quarter of the way through the year after the year. Many readers have reported a slump in their reading (like many authors have noted lethargy where their writing is concerned) and I do understand that: the current global situation makes us all anxious and that hits us in different ways.

I find though that I can only really keep up my positivity through books; if I didn’t have access to books I’m not sure how I’d cope mentally because I’m an inveterate reader — social media, newspapers, food wrappers — and even my fallback, playing the piano, involves me doing a fair amount of sightreading scores.

Apologies, then, to those who are finding your literary mojo dampened: I do sympathise — even as I seek out the next thing to read, for my tottering TBR piles seem at the moment to be inexhaustible.

END_OF_DOCUMENT_TOKEN_TO_BE_REPLACED

The Time of the Ghost
by Diana Wynne Jones,
illustrated by David Wyatt.
HarperCollins Children’s Books 2001 (1981)

Corn yellow and running, came past me just now, the one bearing within her the power to give life in the realms of death.

As with so many of Diana Wynne Jones’s fantasies she weaves in so many strands — autobiographical, literary, supernatural and more — that it becomes almost like an ancient artefact or artwork, an object that mystifies as much as it magnetically draws one in, a magical narrative that repays a second read or more, and then a hefty bit of research and recall.

For example, the ghost of the title hears a voice from a longbarrow, the speaker mistaking a sister called Imogen for his long-dead daughter. This must surely be the Cunobelinus who was transformed in Shakespeare’s play into Cymbeline, who had a daughter called Imogen who was presumed to have been killed. And though the novel is set in North Hampshire the author draws from her childhood in Essex, the area with which Cymbeline and his family is associated.

So already we are seeing autobiographical and literary details being drawn together, but for the innocent reader what comes through most is a mystery story concerning a very strange family and a ghost who doesn’t know who she is.

END_OF_DOCUMENT_TOKEN_TO_BE_REPLACED

In The Shepherd’s Crown Tiffany Aching may be said to come into her own, but in truth she has been coming into her own since she was nine, in the first of the Discworld novels featuring her life on the Chalk. Every couple of years she has come up against a testing adversary — the Fairy Queen, the Hiver, the Wintersmith, and the Cunning Man — and now, aged around seventeen, it seems as if she will have to prove herself yet again.

There is the added poignancy that this is also the last Discworld novel Terry Pratchett took a hand in completing (with the aid of Rob Wilkins and others) and, though not as adroitly finished as the previous titles were, Pratchett at his less than best is still an awesome beast.

At the core of this novel there is, as in all the Discworld novels I’ve so far read but especially in the Aching series, a big beating passionate heart, an organ symbolised by its very title.

END_OF_DOCUMENT_TOKEN_TO_BE_REPLACED

“The wolfe also shall dwell with the lambe, and the leopard shall lie down with the kid and the calfe and the yong lion, and the fatling together, and a little child shall lead them.”
— Isaiah 11:6 (King James translation 1611)

Note that in this biblical quote there’s nowt about lions lying down with lambs, but the traditional paraphrase has a pleasing alliteration to it, does it not? And the proverb, In like a lion, out like a lamb, is even more euphonious, do you not agree?

Some speculate that both proverb and paraphrase are something to do with changing seasons. As it happens, when astrologically speaking Leo approaches Aries at the spring equinox I hope to be smack bang in the midst of several reading prompts, with a selection of book reviews to celebrate the themes which other book bloggers have concocted.

END_OF_DOCUMENT_TOKEN_TO_BE_REPLACED

Today, on the eve of the halfway mark for the twenty-eight days of February, I’m already getting excited about March. As well as planning on reading books for the Wales Readathon and Reading Ireland Month I’m hoping to revisit titles by the late Diana Wynne Jones and Terry Pratchett, both of whom left us in this month.

I’m glad to see that Kristen at https://WeBeReading.com is again running March Magics, the annual celebration of these two fantasy writers (who were both West Country authors by adoption, with connections to my hometown Bristol).

Kristen’s introductory post gives an outline plan of the focus of this year’s event, and I’d like to share with you her principal aims and how my response may shape up.

END_OF_DOCUMENT_TOKEN_TO_BE_REPLACED

The best-laid schemes o’ mice an’ men
Gang aft agley,
An’ lea’e us nought but grief an’ pain,
For promis’d joy!

Each year recently I’ve resolved to either eschew reading challenges altogether or make them manageable by calling them goals or wishes. And each year I find myself sorely tempted by shiny new-to-me memes.

It will surprise none of you that 2021 seems to be the same old same old. In 2016 I succeeded in completing the quantity of books I’d aimed (in the Goodreads Reading Challenge) for by year’s end simply by underestimating the number I was certain to finish, and that’s continued to be the case for five years. But other goals have been more elusive: the fifty titles I listed to be ticked off for the Classics Club challenge ending 2020 remained unachieved, even though I changed some of my choices.

So, Twenty-Twenty-one, how goes it?

END_OF_DOCUMENT_TOKEN_TO_BE_REPLACED

You may remember that I made a conscious effort to resist acquiring books new to me for as long as possible, bearing in mind the many, many unread titles that I already had teetering on my shelves.

As we’re now a quarter of the way through 2020, you bibliophiles out there may (or, more likely, may not) be wondering how well I’m resisting.

The brief answer is, not bad, as I’ll explain. But I’m now in a quandary.

END_OF_DOCUMENT_TOKEN_TO_BE_REPLACED

‘You know, Hwel, I reckon responsible behaviour is something to get when you grow older. Like varicose veins.’
— Tomjon in ‘Wyrd Sisters’

The fourth in Pratchett’s Discworld series is full of witches behaving badly, meddling yet not meddling in the affairs of men. Preceded by Equal Rites it focuses on the kingdom of Lancre with its usurping ruler Duke Felmet and his wife, a castle full of ghosts, a troupe of travelling players and the aforementioned witch trio of Esme Weatherwax, Gytha Ogg and Magrat Garlick.

It’s not the assassination itself that sets things awry — Lancre has seen dastardly deeds done to royalty before and survived — but the misrule following it, and Granny Weatherwax senses the land is unhappy. For this reason and others (such as her being a dyed-in-the-wool contrarian) she determines, along with her coven of three, to nudge things along a bit.

And that includes a bit of messing around with time, accomplished in a manner similar to the ending of Superman the Movie, except with a black-caped Granny flying her broomstick round the kingdom.

END_OF_DOCUMENT_TOKEN_TO_BE_REPLACED

Jamie Hamilton is twelve going on thirteen, living in a past which we can establish is 1879. But when, in exploring his town, he comes across a mysterious building where cloaked and hooded figures flit about his curiosity get the better of him and, by intruding on them, he becomes an outcast from the life with which he has grown familiar.

And it is all the doing of Them, as he soon terms those figures, games players who decide the fates of individuals, societies and worlds. As a ‘discard’ from the game They play he is forced to be both bystander and wanderer as he is thrown from one world to another without so much as a ‘by your leave’.

END_OF_DOCUMENT_TOKEN_TO_BE_REPLACED 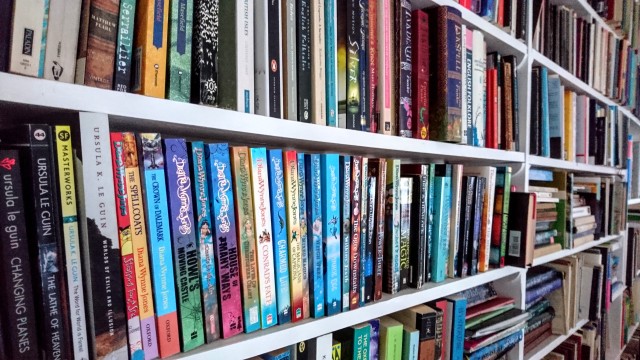 You may remember that at the start of 2020 I’d decided, in a bid to reduce the number of unread books I’d accumulated, to see how long I would go before forking out hard cash for new.

Now, at the end of February, on this intercalated leap year day, it might be interesting to see how I’m managing. And the answer is…

I haven’t bought any new books in the first two months of this year! That, as far as I’m concerned, is a cause for celebration, because I’m an inveterate browser in bookshops and rummager in secondhand book stores. But …

END_OF_DOCUMENT_TOKEN_TO_BE_REPLACED

It’s coming up to that time of year when the door to one season starts shutting while another slowly swings ajar.

Following my New Year commitment not to commit to specifics concerning my 2020 reading I’m not therefore going to detail what exactly I intend to read for March — mainly because I have no idea at the moment!

Nevertheless, vague possibilities are coalescing around upcoming events in the reading calendar.