Presenting the international sensation, the All-New Ms. Marvel! shouts the back cover of this collection of numbers 1-5 of the comic book giving us this origin story. “Kamala Khan is an ordinary girl from Jersey City — until she’s suddenly empowered with extraordinary gifts”: and while we’re given some answers to how this came about, like many such origin stories it’s just the start of much more.

What distinguishes the new Ms. Marvel is that she’s not only a Muslim American with Pakistani parents but also just 16 years old; this means that all the usual teenage anxieties and challenges have then to manage different cultural expectations — in addition to the unexpected acquisition of powers undreamt of.

Luckily she has the mental resources to help her deal with her powers, aided and abetted by (a) her addiction to writing Avengers fanfic and (b) her friend Bruno whose interests in biochemistry may lead to a university scholarship. But whether these will be enough for her to cope with the kind of emergencies her Avengers idols have to routinely manage is another matter.

The cover illustration to the first issue, used also for this collected edition, gives many of the key points of interest. It hints at what is to come with Kamala’s face half hidden, a scarf featuring a Persian-origin Paisley design, and an S-shaped lightning flash logo associated with Ms. Marvel in a former incarnation. But what’s of particular interest are the books the high school student is lugging around — US History, Hadith to Live By, and Illustration & Design — which happen to be what I want to focus on here rather more than a plot summary.

Though seemingly set in our real world, plenty of little clues indicate that this is an alternative USA, not least real live superheroes and a sinister mist caused by the detonation of a terrigen bomb. But there’s more: her two textbooks on American history and the traditional sayings and teachings of Mohammed surely sit uneasily side by side, just as Kamala’s own joint Pakistani-American heritage finds her conflicted.

In a TED Talk Ms. Marvel‘s creator and editor Sana Amanat, herself brought up in the New Jersey suburbs as the child of Pakistani immigrants, emphasised that “the big idea” behind the character’s genesis was “very much about minority representation”, and that “the bigger idea was about finding your authentic self”; she hoped that in creating a relatable superhero future generations wouldn’t experience the kind of identity rejection she did. So, side by side with conventional images of urban America — neighbourhood cafés, waterfront parties, high school — are episodes showing Pakistani family life, a lecture in a masjid or mosque, and a mehndi party.

But, as always, the story’s the thing and characterisation the king. Kamala (her name derived, as Mr Khan tells her, from Arabic kamal meaning ‘perfection’) is well portrayed, as are her parents, her brother and her friends and acquaintances, who will all doubtless reappear in future episodes. Just now we find how her continuous disobedience results in her being grounded — ineffectual, as it turns out — and how her lack of experience leads her to make crucial mistakes; but she learns to value friendships and recognise moral duty when it calls.

Visually No Normal is a feast for the eyes: we get multiple perspectives in several sequences and variety in page spreads; color artist Ian Herring’s palettes help sustain atmosphere; the caricature look of characters in distance shots doesn’t bother me much, more than compensated by close-up detail and by the humorous asides offered by printed material and advertising in background scenes.

This being an origin story there’s no good-versus-evil theme to dominate proceedings, but that doesn’t mean there aren’t opposing forces for Kamala to contend with. As well as a religiously upright family to put the kibosh on any plans she might have, there are the mysterious Mr Eddison aka the Inventor and his sidekick Doyle, plus the mystery of how she came by her powers in the first place. And what are those powers which ‘bendy girl’ (as an adversary calls her) exhibits? They’re not just to, in her terms, “embiggen” or “disembiggen” but to generally metamorphosise her body and her clothes. To what extent these powers will prove advantageous or disadvantageous she has — and we have — yet to find out.

Coincidentally a Ms. Marvel TV miniseries is due for airing later in 2021, followed by the movie The Marvels. 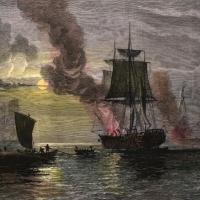