We’re just over a week away from All Saints or All Hallows Eve, in case it had somehow slipped your mind in our modern commercialised world.

In the pagan Celtic period it was the start of Samhain in Ireland and Scotland, and in Wales Hallowe’en is Noson Galan Gaeaf, ‘the eve of the first day of winter’. When the start of winter was christianised in the 8th century the feast of All Saints was transferred here from the Pentecost period; no doubt this was due to ancestor worship traditionally being marked on the cusp of winter — with guising and offerings of food and drink at the graveside by the descendants of the deceased to appease their spirits — and therefore an apt time to honour all the saints and other souls who had gone before.

Myself, I don’t go for the partying or the trick-or-treating or the churchgoing, but I’m happy to mark the occasion online by offering a few words about Hallowmas on this post. 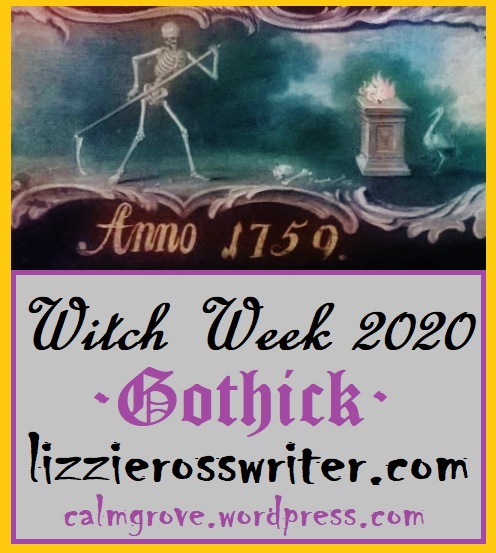 In case you’ve missed my previous announcements — if not, pardon me for repeating myself — the end of this month will see the return of Witch Week, an annual celebration of all things fantastical and/or spooky inaugurated by Lory at the Emerald City Book Review, hosted last year by myself and this year by Lizzie on her blog, beginning on 30th October.

The theme for 2020, if you hadn’t already spotted it, is GOTHICK and features book reviews, overviews and a readalong of Neil Gaiman’s The Graveyard Book. Miss it if you dare!

I also have a title or two to review before the end of the Readers Imbibing Peril event (which has been running over September and October) if I can squeeze those in.

In the meantime, the Latin epitaph you can see in my photo at the start of this post is from a biblical psalm, assuring the dead man that he will never be forgotten. Sadly, I’ve forgotten where I took this picture and who it commemorated …

“The just man will be eternally remembered;
he shall not fear evil tidings.”

Incidentally, newish followers may not be aware I have a few other blogs which I update occasionally; do feel free to visit them and comment:

Pendragonry:
Essays on the Arthurian legends

Just Reading A Book
Lioness at Large
Folksong and Fantasy