John Ruskin: The King of the Golden River, or
The Black Brothers: A Legend of Stiria (1851)
Illustrated by Richard Doyle, E.P.Dutton / J.M.Dent 1925
Illustrated by Charles W Stewart, Edmund Ward 1958

“The King of the Golden River was written in 1841, at the request of a very young lady, and solely for her amusement, without any idea of publication…”

The very young lady was the twelve-year-old Effie Gray and the writer was John Ruskin, ten years her senior.

Ruskin was eventually to marry Effie in 1848 but the marriage foundered and was annulled, Effie then marrying the artist John Everett Millais. All that turbulence was in the future, however, and Effie must have been delighted with her present, along with later generations too after the tale was published in 1851.

The Brothers Grimm had issued the first edition of their Children’s and Household Tales back in 1812, initiating a public enthusiasm for what were called fairy tales by English-speakers. Ruskin gave a nod to German-speaking primacy in this genre by setting his story in ‘Stiria’ or Styria, a mountainous region straddling modern Austria and Slovenia. Like many of the Grimms’ tales (which the brothers were continually re-writing and ‘improving’ in successive editions) there is a strong moral dimension to Ruskin’s literary tale which has led commentators to label it a fable or parable. Who knows if the young Euphemia was aware of the overt import of Ruskin’s morality tale or whether she instinctively accepted it as natural corollary of prevailing Victorian values, values shared by many readers today.

In five chapters (no genuinely oral folktale would have chapters!) the tale is told of the three Black Brothers, Hans (that is, Johannes, John in English), Schwartz (in German this simply means ‘black’) and Gluck (‘luck’). Many of the traditional fairytale tropes are in place: the youngest brother is the last but not the least; he who shows compassion without expectation of reward will be rewarded; supernatural helpers are on hand to offer guidance or punishment.

The two older brothers, grasping and cruel, are unwelcoming of South-West Wind, Esquire, and thus suffer retribution in the loss of their farm and livelihood. They don’t learn their lesson, however, and when they move to town to become goldsmiths their greed results in near penury.

Into this potential disaster there appears to Gluck the King of the Golden River in very singular form, with the promise of riches for the one who succeeds in completing a task to the letter.

“Whoever shall climb to the top of that mountain from which you see the Golden River issue, and shall cast into the stream at its source three drops of holy water, for him, and for him only, the river shall turn to gold. But no one failing in his first, can succeed in a second attempt; and if any one shall cast unholy water into the river, it will overwhelm him, and he will become a black stone.” 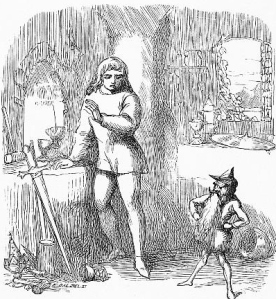 This being an improving fairy tale the reader may guess the final outcome.

The King of the Golden River isn’t perfect — the pacing is occasionally uneven, the odd explanation is rushed, and we miss the formulaic repetition of wording which is such a satisfying feature of oral tales. But this is a narrative that is compelling and which lingers in the memory, not least the environmental messages which apply even more urgently today.

My memories are enhanced by the original distinctive line illustrations by Richard Doyle which graced several re-publications over the decades, but the story has proved popular with several other artists such as Arthur Rackham and Charles Stewart providing colour as well as monochrome images. Did Effie rely solely on Ruskin’s words to create the scenes in her mind’s eye or did Ruskin himself provide some illustrations, now lost? Diana Wynne Jones recounts how as a child evacuated to the Lake District during the Second World War she inadvertently rubbed out some line drawings, mostly of flowers, that she’d discovered in a cottage: they turned out to be by John Ruskin. It’s sheer speculation of course, but it’s tempting to wonder if they included sketches for that fairy tale he wrote for another little girl, almost exactly a century before.