‘You know, Hwel, I reckon responsible behaviour is something to get when you grow older. Like varicose veins.’
— Tomjon in ‘Wyrd Sisters’

The fourth in Pratchett’s Discworld series is full of witches behaving badly, meddling yet not meddling in the affairs of men. Preceded by Equal Rites it focuses on the kingdom of Lancre with its usurping ruler Duke Felmet and his wife, a castle full of ghosts, a troupe of travelling players and the aforementioned witch trio of Esme Weatherwax, Gytha Ogg and Magrat Garlick.

It’s not the assassination itself that sets things awry — Lancre has seen dastardly deeds done to royalty before and survived — but the misrule following it, and Granny Weatherwax senses the land is unhappy. For this reason and others (such as her being a dyed-in-the-wool contrarian) she determines, along with her coven of three, to nudge things along a bit.

And that includes a bit of messing around with time, accomplished in a manner similar to the ending of Superman the Movie, except with a black-caped Granny flying her broomstick round the kingdom.

This is yet another delightful Discworld instalment. There is the expected and eminently quotable humour on every page, of course, sometimes determinedly slapstick but frequently lurking quietly until the punchline is delivered:

Hwel looked at the baking purple moorland around them, which stretched up to the towering spires of the Ramtops themselves. Even in the height of Summer there were pennants of snow flying from the highest peaks. It was a landscape of describable beauty.

The following pages, with the witches helping the action along, pretending to be humble old wood gatherers and muttering ‘Lawks’, is comic gold. But with Pterry it isn’t merely about pratfuls, for here also are the Shakespearean riffs — most obviously on Macbeth, Hamlet, Lear and Henry V (with a sonnet or two thrown in) — in which he both caricatures conventions and subverts outcomes.

When he’s not tickling funnybones he’s making us care about individuals, because despite their faults and foibles Lancre’s inhabitants mostly want to rub along with each other. We care about Granny and Nanny and Magrat, whether meeting on blasted heaths or residing in the comfort of their own cottages; we want favourable outcomes for the lovesick Fool, the dwarf bard Hwel and the talented actor Tomjon; and we want well-deserved downfalls (in one case, quite literally) for the dastardly Duke and Duchess. 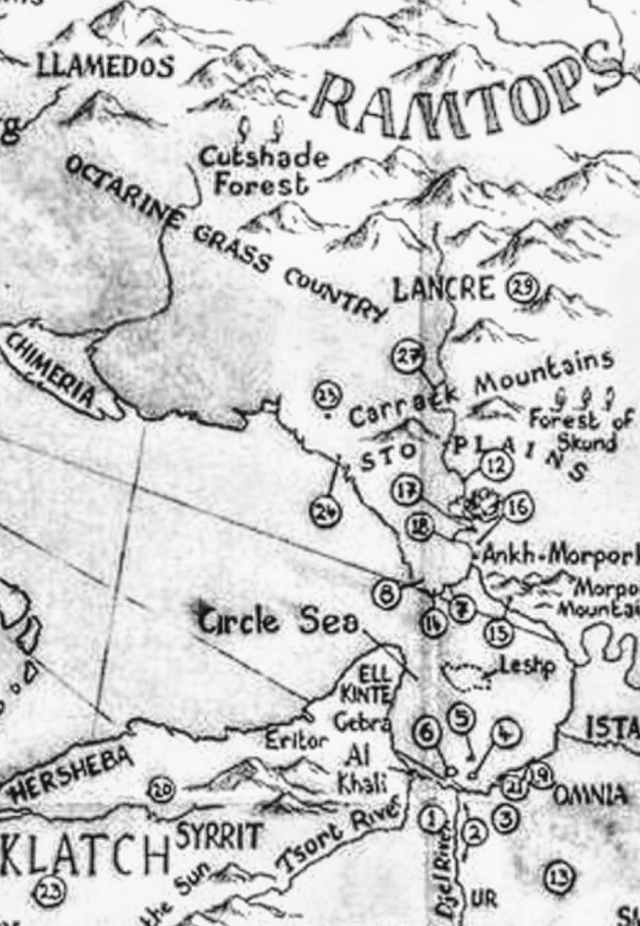 Because this is, as I’ve long asserted, Pratchett’s chief skill: to let us in under the skin of his characters, to believe in their various dispositions and motivations — what Granny calls ‘headology’ — and to revel in their range, whether young or old, short or tall, alive or dead.

It’s not all based in Lancre (the name referencing both an historic French witchfinder and Lancashire, famous for the witches of Pendle) because we also journey to the metropolis of Ankh-Morpork and back again: here the Fool finds himself replicating The Proclaimers song (“But I would walk 500 miles | And I would walk 500 more | Just to be the man who walks a thousand miles | To fall down at your door”) before he can return to his destined lady love.

Which is fine, except that Granny Weatherwax doesn’t hold with destiny:

Destiny is important, see, but people go wrong when they think it controls them. It’s the other way round.

Wise words from a witch. Which is how it should be.

A contribution towards this year’s March Magics event, hosted by Kristen at We Be Reading to celebrate both Terry Pratchett and Diana Wynne Jones.

It was nice to meet Granny Weatherwax and Nanny Ogg again after Equal Rites, this novel’s immediate predecessor in the Witces series. And she reappears in the Tiffany Aching series, of which I’ve read the first three titles: The Wee Free Men, A Hat full of Sky and Wintersmith.