An intriguing photographic image, with Les Sœurs Brontë written on its reverse, was found earlier this decade in a private Scottish collection by Robert Haley from Lancashire while he was researching for a book on Victorian photography.

As Haley explains in detail on his Brontë Sisters website this monochrome picture of three young women, two of them facing a third who is looking directly at the camera — and at us — can tell us a lot about when and where it was taken, what processes the portrait went through and, most importantly, who these women really were.

Haley makes a convincing case that the woman with the very frank gaze (possibly because she’s short-sighted) is Charlotte Brontë and the other two her sisters, Emily and Anne. Equally, he argues — using visual evidence — that the woman in the middle with the Jenny Lind hat is Emily, and the figure with the aquiline nose Anne.

The collodion image is likely to have been copied from a daguerreotype taken between the death of their brother Branwell and that of Emily in, he calculates, late 1848, at a studio in York.

Compared to the famous painting called the ‘Pillar Portrait’ by their brother Branwell (who had obliterated his own image, leaving a blank pillar-like space in the grouping) the positions — Haley argues — are reversed, with Emily still in the middle but Anne on the left and Charlotte on the right:

For comparison, here is the photograph reversed so that the sisters are in the same positions as in the painting: 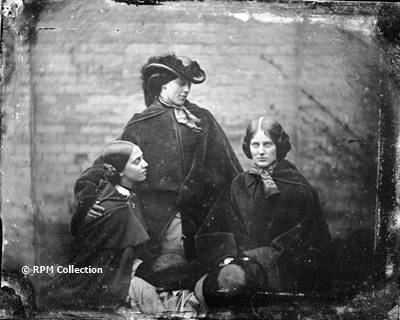 Let’s focus on Charlotte just for the moment: one contemporary reminisced that Charlotte’s eyes were “of extraordinary brilliancy and penetration” and it’s easy to concur with Haley’s identification, even given that sitters at the time had to remain unmoving for a significant amount of time.

As it happens, I’ve been slowly plodding through Charlotte’s novel Shirley, which she began in 1847 after the publication of Jane Eyre but only completed after the sudden deaths of her siblings all in the space of a single year, 1848-9. A third of the way through the novel we’ve only just been introduced to the title character. I had put it aside temporarily, unable to get a handle on quite what the novel was about.

However, reading Angela Steidele’s study Gentleman Jack is proving very revealing. If you’ve seen the recent BBC/HBO series with a similar title (one of several pieces in the media in recent years focusing on this remarkable woman) you’ll be well aware of Anne Lister of Shibden Hall, an early modern feminist, lesbian, industrialist, traveller and mountaineer. A section in Steidele’s study points to likely links with the Brontës, particularly Emily and Charlotte: they were all near contemporaries, and all from the West Riding of Yorkshire.

Claire Harmon’s biography of Charlotte had already alerted me to Emily’s probable awareness of Anne Lister from late 1838 when Emily taught for a few months at Elizabeth Pratchett’s Law Hill School: this was situated on the hills above Halifax.

Law Hill House in Southowram is less than two miles south of Shibden Hall, both being around the 200 metre contour east of Halifax. “It was during that winter [November 1838 onwards] that Emily Bronte’s ideas for Wuthering Heights (1847) matured,” writes Steidele, suggesting that the novel’s “famous main conflict might even have been inspired by Anne Lister and Ann Walker,” Lister’s partner.

“Emily Brontë was certainly aware of them,” she adds. “The school’s headmistress, Elizabeth Pratchett, knew Anne Lister personally and most likely hinted at the local gossip about the two neighbours. Through Law Hill School, Emily met numerous relatives of Ann Walker. A walk she often took led her close to Shibden Hall.”

It’s striking that Anne and Ann “were united by a forbidden love like that between Heathcliff and Cathy,” but Steidele also believes that Emily “must have got wind of the longstanding conflicts over inheritance in the Walker family, which are reflected in the second strand of Wuthering Heights.”

It’s tempting to think that Charlotte may also have had Anne Lister in mind when writing Jane Eyre. Anne’s first lover, at boarding school, was Eliza Raine, the illegimate daughter of a colonial and an Indian woman; she was consigned to Dr Belcomb’s Clifton Asylum in York a while after her affair with Anne broke up. Was Eliza the model for “the locked-up, mentally disturbed Bertha Mason, a Creole woman from Jamaica, a ‘half-caste’ like Eliza”?

And now we come to Shirley, a novel set during the Chartist troubles around 1812 and focused on the ‘gothic old barrack’ called Fieldhead. In the novel the property

had descended, for lack of male heirs, on a female. There were mercantile families in the district boasting twice the income, but the Keeldars, by virtue of their antiquity, and their distinction of lords of the manor, took precedence of all.

Though the old dinosaur Reverend Helstone considers Shirley Keeldar a ‘chit’ and ‘saucy enough where she dare’, it’s significant that she

had no Christian name but Shirley: her parents, who had wished to have a son, finding that, after eight years of marriage, Providence had granted them only a daughter, bestowed on her the same masculine family cognomen they would have bestowed on a boy, if with a boy they had been blessed […]

It turns out that Shirley, 21 years old in 1812, would therefore have been born in 1791; and, perhaps not without coincidence, Anne Lister was also born in 1791, on 3rd April. As Steidele comments, the combination of a rich landowning business woman, uninterested in marriage and endowed with a male first name (“which,” she adds, “only changed gender as a result of the publication of the novel itself”) strongly echoes the career of Gentleman Jack.

Here then is a means by which to unblock the logjam in my reading of this novel: Shirley Keeldar of Fieldhead, soon to be staunch friend of the intelligent but quiet Caroline Helstone of Briarfield, starts to make more sense. It would say a lot about Charlotte’s views on female independence if Anne Lister was an inspiration for the main protagonist of her novel, along with Emily (who is assumed to have been the main model for Shirley).

And the Brontës continue to exert their influence down the years. I think of Misselthwaite Manor in Frances Hodgson Burnett’s The Secret Garden (1911), with its reclusive Archibald Craven, its situation on the edge of the Yorkshire moors, the “wuthering” wind that moans around the building and the secret that it conceals. Then there’s Midnight Court in Joan Aiken’s 1974 novel Midnight is a Place, another Yorkshire manor, burnt down like Thornfield but by a man who’s lost his wits (at around the time Charlotte and Emily were briefly away from home, in 1842).

And before that Aiken had penned The Wolves of Willoughby Chase (1962) in which a young girl travels to stay with relatives in a Yorkshire mansion, where she is put in charge of a governess. This time, however, it is the governess who appears to be mad…