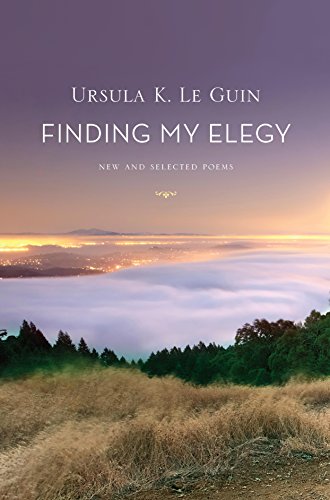 Le Guin’s fantasy fans will recognize these few lines from The Creation of Éa, Le Guin’s imagined mythology of Earthsea:

Only in silence the word,
only in dark the light,
only in dying life;
bright the hawk’s flight
on the empty sky.

Some of us know that Le Guin wrote poetry before she wrote fiction, but how many of us have read beyond the fragments in her novels? Today, poet and guest blogger Tanya Manning-Yarde tantalizes us with a taste Le Guin’s poetry.

Tanya Manning-Yarde, PhD, is a poet and freelance writer from New York City. A graduate of Rutgers University and University at Albany, she recently worked as a copy editor and contributing writer for Bronze Magazine. She blogs at Tanya Manning-Yarde PhD (Instagram @every_watering_word_author) and is a freelance blogger for the annual Montclair Film Festival in Montclair, NJ.

Prior to pursuing a career as a writer, she was a high school English/Language Arts teacher, Assistant Professor, Instructional Coach, and an educational consultant. Her poems have been published at Literary Mama, Memoryhouse and Random Sample Review. Her first poetry collection, Every Watering Word, was published in 2017 (Wasteland Press).

Throughout several of Le Guin’s poems is an attentiveness to contrast in which she details observations of an object, concept or location and compares it to something else. In one poem titled “Writers,” Le Guin makes a stark comparison between visual artists and writers, between the art that is physically and sensorially rendered by sculptors and musicians to the revelatory unfolding that writers make readers do. It is this unfolding by the reader that Le Guin contends is the art of a writer.

Le Guin discusses the creating and delivering of written art as not occurring exclusively in the artist’s hands but as transactional; the unraveling and excavation of meaning occurs between writer and reader: “A writer’s work /is with the insubstantial word /the image that can only find /its being in another’s mind.” Writer and reader are collaborative cartographers.

Le Guin also demonstrates dexterity and alacrity in designing interpretive lenses for readers to use in entering her poems. Several of her pieces situate readers as sociologists accompanying her in examination of how nature and humans live and interact within a shared world.

In one such poem, “April in San Jose,” Le Guin employs contrasting images of floral aesthetics and abject humanity, illustrating through contrast the experiential disparity between nature and man. Sensory laden descriptions of natural beauty present the experience of nature as abundant and self-affirming (“sweetness of freesias, garlands, wreaths,” “dark fragrance of eucalyptus,” and “glitter and rustle of inordinate palms”). Alongside such images are ones captured of men in conflict, downtrodden and deflated. In contrast to their thriving, colorful and natural counterparts, these men simply endure their existence; they “bark wordless pain like dogs, /roar rage in one dark syllable, /or stand and beat an oak tree with their fists.” These disparate descriptions suggest that the experience of life itself is not absolute. More to the point, Le Guin juxtaposes many aspects of an urban setting to make us understand the way that dissimilar phenomena paradoxically co-exist and co-mingle (“in the valley of ghosts and orchards”).

Evident in Le Guin’s poems is the depiction of nature in service to a larger conversation. She references natural settings not only for their aesthetics but as markers of a larger transcendental journey, a means to consider Nature and our own existence as multi-faceted and multi-dimensional.

If I walk south
with the ocean always on my right
and the mountains on my left,
swimming the mouths of the rivers
the estuaries and the great canal,
if I walk from high tide to low tide
and full moon to new moon, south,
and from equinox to solstice, south,
across the equator in a dream of volcanoes, …

In this excerpt from “For Gabriela Mistral,” Le Guin provides a litany of natural locations, distances and natural artifacts to punctuate the lengths the narrator will go for his/her voice to be aligned with an original calling, an ethereal language. These natural settings serve as markers along a larger journey, both physical and metaphoric.

Le Guin is astute in writing poetry in service to providing social commentary on phenomena characteristic of the human experience, spanning personal experiences such as parenting to collective experiences such as war. Conflict and war particularly are topics that permeate several of Le Guin’s poems. In “The Curse of the Prophetess,” centered on the conflict in the Middle East between Israel and Palestine, Le Guin creates a litany composed of invocations condemning irreverent behaviors humans show one another, and later, a hope for the recognition, by those involved, of one another’s humanity.

In “Soldiers,” she creates a space to illustrate the facets of war and its impact on both soldier and society, contrasting images of fallen soldiers and enthusiastic crowds, patriotic celebration and protests against fatalities, in service to a larger question regarding what is gained and lost in war.

Ursula Le Guin has left a legacy of writing that will require many lifetimes to digest. Dexterous and nimble in free verse and quatrain, agile in use of meter and rhyme, willful in refusing to align with any one form of writing, Le Guin evinces possibilities wildly imagined.

Thank you, Tanya, for this thought-provoking post. Looking for an instant Le Guin poetry fix? A few of her poems have been published online here.