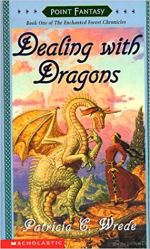 We’re excited to have this guest post from Marlyn Beebe, a west-coast (USA) librarian with Canadian roots. We thought a librarian would know of some fantasy books that would be new to us, and she did. With her permission, we’ve added two books to her suggestions, to make this a perfect Top-Ten list. Interesting side-note: these are all first books in series. No doubt about it, readers love a good series.

Marlyn grew up in Edmonton, Alberta, Canada, where she graduated from the University of Alberta with a degree in Library and Information Studies. Not being a fan of frozen water falling from the sky, she now lives in Southern California with her husband, Tod, and their cat, Puck. She works part-time at multiple libraries and spends the rest of her time reading, reviewing, blogging, and watching hockey games. Marlyn reviews books for School Library Journal, as well as for her blog Stuff and Nonsense. Head over to her blog to see what else she enjoys reading.

I’ve always loved literature about strong women, whether realistic or speculative fiction, historical or contemporary. By the time the books below were published (yes, even the ones from the last century!), I was already an adult, and wished passionately that I could have experienced them as a child or teen. I’m grateful that these books, and so many more like them, are available for me to share with today’s young people!

Just to make things interesting, we (Lizzie, Chris and Marlyn) have added a tiny spin to this list. Way back in 2009, The Alan Review published “Dragon-Slayer vs Dragon-Sayer”, an article analyzing female fantasy protagonists.¹ The authors argue that when fantasy writers give their female protagonists active roles (as opposed to waiting to be rescued by and then married to the hero), the characters tend to take one of two roles: Dragon-Slayer (basically the heroine acts just like a hero, using a sword to “overpower and conquer” villains) or Dragon-Sayer (the heroine uses feminine skills to nurture and take care of the villains’ needs, thereby de-fanging the villain). Marlyn, Lizzie and Chris have identified where we think all but two of the heroines fall within this (imperfect) dichotomy. If you disagree, let us know! And if you can decide about the two we didn’t identify, let us know that as well.

Alanna: The First Adventure by Tamora Pierce (Atheneum Press, 1983).
The first of the 4-book Song of the Lioness series, in which Alanna pretends to be a boy in order to work as a page in the royal court of Tortail. DRAGON-SLAYER

The Hero and the Crown by Robin Mckinley (Greenwillow Books, originally published 1984).
The story of Aerin of Damar, and her evolution from a shy princess to the heroic queen who saves her country from invaders (and a dragon!). McKinley’s novel won the 1985 Newbery Award, and is the prequel to The Blue Sword, a Newbery Honor winner published in 1982. DRAGON-SLAYER

Howl’s Moving Castle by Diana Wynne Jones (HarperCollins, originally published 1986).
Sophie, the eldest of three daughters, unwittingly attracts the ire of the Witch of the Waste, who puts her under a horrid spell that transforms her into an old lady. (Two more books in series: Castle in the Air and House of Many Ways.) DRAGON-SAYER

Dealing with Dragons by Patricia C Wrede (Jane Yolen Books/Harcourt Brace Jovanovich, 1990).
The first of the 4-book series The Enchanted Chronicles, which tell the story of Princess Cimorene, who leaves her boring kingdom to become assistant to the dragon Kazul. DRAGON-SAYER

Soulless by Gail Carriger (Hachette Book Group, 2009).
The first book in The Parasol Protectorate series introduces us to Alexa Tarabotti, a bluestocking living in a steampunk version of Victorian London, populated by werewolves, vampires, and ghosts. Carriger has written several series and stand-alones which take place in her “Parasol-verse”.

Akata Witch by Nnedi Okorafor (Speak/Penguin Random House, 2011).
Sunny Nwazue returns to Nigeria, the country of her birth, and has to adjust her New York attitudes to her new life. Soon after learning she has magical powers, she teams up with three other students to fight a powerful criminal. A sequel (Akata Warrior) was published in 2018. DRAGON-SLAYER

Born Wicked by Jessica Spotswood (Penguin Putnam, 2012).
Cate Cahill is the oldest of three sisters whose mother died when she was 14. All three sisters are witches in a world where witchcraft is feared. There are two more books in the Cahill Witch Chronicles, each focusing on one of Cate’s younger sisters.

A School for Unusual Girls by Kathleen Baldwin (Tor Teen, 2015).
In the early 1800s, intractable upper class girls are sent to Stranje House “finishing school”, to be turned into proper society women. Each of the (so far) three books in the series focuses on a different student, who becomes entangled in espionage. This is more Regency romance than fantasy, but the alternative history slant tips the scales to qualify it for inclusion on this list. DRAGON-SLAYER

Borderline by Mishell Baker (Saga Press, 2016).
Millie Roper, physically disabled with a personality disorder, is recruited by a mysterious organization, The Arcadia Project, which acts as liaison between Hollywood and Fairyland. So far, there are three books in The Arcadia Project series. DRAGON-SLAYER

OK, Dear Readers, that’s Marlyn’s list. Have you read any of these? What faves need to be included (and are the heroines Dragon-Slayers or Dragon-Sayers)?²

² Lizzie Ross is too retiring and diffident to mention her own Kenning Magic (Saguaro Books 2013) which does indeed feature a kick-ass heroine and dragons; I’ll leave you to discover if Noni is a Dragon-Slayer or Dragon-Sayer! Chris