Another menhir by Temple Druid

Where I currently live in Pembrokeshire it’s hard to escape standing stones. If I go out our gate and walk in a clockwise direction, in the course of a five-mile walk I will pass three of them, one unnamed, another two all that remains of a complex called Cornel Bach. If I go on another clockwise four-mile road walk I’ll pass two stones, one unnamed, another — possibly not in situ –all that remains of some stones at the aptly named Temple Druid. Within a relatively short walking radius I can pass the only surviving prehistoric stone circle in the area at Gors Fawr near Mynachlogddu or another complex at Meini Gwyr near Glandy Cross in Carmarthenshire. Up on the nearby Preseli Hills there is a stone enclosure called Bedd Arthur or Arthur’s Grave, and a pair of menhirs called Cerrig Meibion Arthur or the Stones of the Sons of Arthur. And of course the hills are where the bluestones of Stonehenge were quarried — reputedly. You can hardly take a step without tripping over one.

Terry John is Pembrokeshire born and bred and knows southwest Wales like the back of his hand, not least as a former Education Officer for the Pembrokeshire Coast National Park. In this short B5 book of a little over sixty pages he sets out to describe the standing stones of West Wales, in what was anciently known as Dyfed: Pembrokeshire and parts of Ceredigion and Carmarthenshire. As he tells us, between seventy and one hundred standing stones — he uses the term maenhir (Welsh for ‘long or tall stone’) in preference to the more accepted menhir, from the Breton — remain in each of the three counties. This is an impressive number, and the variety in size, shape, date, purpose and location is astonishing. Contrary to what one might think, not that many pillars are bluestones: sandstone, quartz, gritstone and igneous rock (not ‘ingenous’ as the typo has it) are more common, apparently.

The big questions one is most likely to ask are ‘how’ and ‘why’ — how were the stones raised and why did prehistoric peoples go to all that effort? The author makes a valiant effort to discuss these issues, but needless to say it is rather difficult to come up with definitive answers. It’s clear from the archaeology that almost every site that’s excavated produces sometimes unclear and frequently ambiguous evidence for the processes involved in raising each monolith, and virtually no evidence for manpower involved or methods of transportation. As for likely purposes, libraries of books and learned journals have come up with myriad hypotheses: rituals, astronomy, ancestor worship, sacrifice, memorials, boundary markers, waymarkers and so on. They could all be right in different circumstances but there is no one-size-fits-all solution.

The latter fate of too many stones — many dating from the Neolithic, some from the Bronze Age — has compounded our uncertainties. Many have been moved, used as gateposts, dynamited, re-used for building material, defaced, Christianised or have simply disappeared, with the result that our understanding of any possible grand schemes, let alone minor ones, will always be imperfect; on this subject the author can only speculate. Because they’ve been recorded we can be a little more certain of various folk traditions and tales that have arisen to account for the stones in later periods, but these too are only speculations based on suppositions and imaginative reconstructions — they can hardly represent what was intended millennia ago. Of modern myths — ley lines, anomalous power grids crisscrossing the globe, ancient shamans levitating stones, druids — the author thankfully says nothing.

Terry John has come up with what is effectively a brief introduction to these mysterious sentinels from the past, and if the general thrust of the text is a little vague then it merely reflects the state of knowledge in the mid-nineties, not much advanced in the intervening twenty years. The booklet’s seven chapters are supplemented by a précis of four excavations, a useful gazetteer of some ninety sites, a select bibliography and an index. Undoubtedly the highlight of this publication is its inclusion of nearly thirty illustrations by the author, a mix of monochrome and colour photographs enlivened by John’s own line illustrations (he is a trained artist). He is presumably also responsible for the map, more evocative than informative in that it shows the spread of standing stones in West Wales in relation to high ground (probably above 200 metres though no scale is given); unfortunately apart from four towns no prehistoric sites are identified.

There is no doubt that to account for the seemingly nonsensical raising of menhirs we are reduced to that good old archaeologists’ standby of ‘ritual purpose’. Quite what the nature of the ritual and the sanctity of the stones was is a moot point, but the author is probably correct in describing them as ‘sacred’. While focusing on pillars — singly, in pairs, alignments or other patterns — he does mention in passing other features such as communal tombs (Pentre Ifan in Pembrokeshire is the best known) and Dark Age re-use (I suspect the inscribed stone from Llangolman in the Preselis, now in Cenarth churchyard, Carmarthenshire, was formerly prehistoric, along with its companions now in Maenclochog church). As The Inscribed Stones of Dyfed was another title in Gomer’s West Wales series the omission of Dark Age pillars is understandable, as also are the recent crop of Gorsedd stone circles raised by successive National Eisteddfods in the area: St Davids, Haverfordwest and Fishguard spring to mind (the last place even boasts two circles). But as a guide to the prehistoric standing stones of Dyfed this is as good a primer as any.

One of the stones in a gorsedd circle, Fishguard, Pembrokeshire 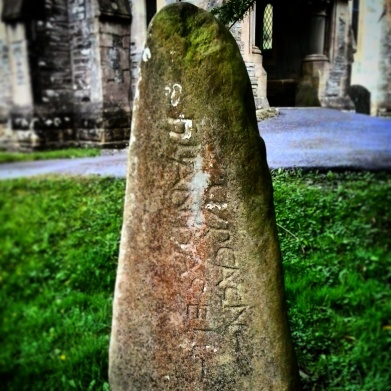