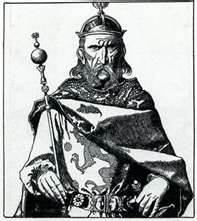 Howard Reid apparently has all the right academic credentials – an unpublished PhD thesis in anthropology based on research among hunter-gatherers in Brazil – and, as well as practical experience from living with Tuaregs in North Africa, he has made documentaries about ancient civilisations for the BBC, Channel 4 and the Public Broadcasting Service in the USA. So you would expect him not only to declaim knowledgeably with his Indiana Jones hat on but also to discuss with scholarly rigour wearing his mortar board.

Not a bit of it. This, I’m afraid, is a thoroughly irritating read, partly because he deliberately dispenses with any real scholarly apparatus (apart from a rather uncritical bibliography) and partly because, despite an enthusiastic description of nomadic peoples of central Asia, he clearly is all at sea with his Arthurian material. In fact, so inadequate is this publication as a contribution to the Arthurian debate that I am led to question either Reid’s integrity as an anthropologist (unlikely, in view of his Cambridge doctorate) or his motives in producing what seems to be a cynical ploy to cash in on the increasingly saturated Arthurian book market (the more likely explanation).

Reid argues that the nomads of the steppes, particularly the Scythians, Sarmatians and the Alans, were so innovative and culturally pervasive that they virtually single-handedly introduced to medieval romance the sword-in-the-stone motif, the grail, the notion of chivalry and the return of Excalibur to the Lady of the Lake. This is the equivalent of the diffusionist theory that the pyramids of Egypt, the Americas and Asia were so alike that they had to have the same origin (preferably Atlantis). Reid feels that to point out a parallel and then to sketch in a postulated chain of transmission is enough to prove his case. But it isn’t.

Of course, the steppe origin theory for the Arthurian legends has been around a few decades, though to read this book you would think he had mostly come up with the idea himself. He also overstates his case, such as it is. You might think, coming fresh to his argument, that the Romans were lacking in effective cavalry before the incorporation of steppe horsemen into their armies – but the evidence is otherwise. As Arrian’s Ars Tactica of the 2nd century makes clear, many cavalry terms were derived “from the Iberians or the Celts … Celtic cavalry being held in high regard by [the Romans] in battle”. Ann Hyland reminds us that “the Celts and Spaniards, the two peoples Arrian singles out as influencing Roman Cavalry tactics, had a long history of equestrian warfare behind them… During Vespasianic times the Gallic or Celtic peoples were supplying by far the largest proportion of auxiliary and cohortes equitatae cavalry to the Roman army… In fact the profile of the Spanish horse was to place him in a position of supremacy never yet to be lost” (Nyland 1993: 91). The fact is that the Romans, as Arrian acknowledged, were quick at “taking over good customs from every source and making them their own”, and this included some steppe peoples’ cavalry practices, including the feigned retreat, the parting (“Parthian”) shot and use of the dragon standard. This doesn’t mean though that steppe practices and lore entirely superseded and obliterated earlier practices and lore.

Reid declares that the Romans settled many Sarmatian troops throughout the empire (including Britain) in the fourth century, with the result that “many of the prized cavalrymen had been reduced to the status of peasants within a generation or two of their settlement”. These then are the now insignificant peoples whose hero lore, according to Reid, was unexpectedly to dominate the literature of medieval Europe.

And yet, even if the steppe nomads had made as big and as permanent a cultural impact on Europe as Reid says, there is a huge chronological gap in his lines of transmission. The pressures that they exerted on the overstretched Roman Empire in its last few centuries are indisputable. However the flowering of the Arthurian legends in Europe comes in the 12th and 13th centuries, with all the motifs that he keeps reminding us of, but there are no apparent intermediaries in the intervening six centuries that Reid bothers to quote (presumably because there are none). The “typical” Arthurian romance motifs – swords in stones, ladies in lakes, knights on horseback – sprang forth, Reid would have us believe, from a field that lay fallow for over half a millennium.

There are several other irritations in his publication. The popularity of the personal name Alan (in its various spellings) – of which Leslie Alan Dunkling notes “All that can be said for certain is that the name is ancient and Celtic” – is, according to Reid, really to be attributed to key figures from the Alan peoples dispersed throughout Europe. Then, we have the general Stilicho mysteriously becoming a Roman Emperor on page 189, and St Germanus receiving the title dux bellorum or ‘war leader’ from both Bede and Nennius (page 210) in passages oddly missing from the editions on my shelves. (To be fair, Bede does use the title dux of Germanus, but not dux bellorum.) And Arthur’s name is derived, we are told (page 212), from the Alan king Goar (also known as Eothar), bested by Germanus in 446. Therefore, Reid deduces, Goar / Eothar is therefore the historical original of our hero… And so it goes on.

Finally, I heartily disliked Reid’s (largely unnecessary) use of brackets (such as these) which should have been eliminated at some stage in the editing process but which remain as symbolic of this highly idiosyncratic reading of the origins of the Arthurian legends.

Any plus points? Well, the colour plates are nice, even if not always relevant to Reid’s central argument. Incidentally, the publishers have selected as a cover design one of the few medieval illustrations to feature Arthur’s dragon standard, familiar to many from the front of the Penguin edition of Geoffrey of Monmouth’s Historia. Curiously, the illustration was used in a similar way for Rodney Castleden’s King Arthur, the truth behind the legend (2000), and the credits make the same mistake in ascribing it to Robert de Barron (instead of Borron or Boron). And yet, of all the Arthurian books listed by Reid in 2001, Castleden’s is the most significant omission.

4 thoughts on “An idiosyncratic reading of Arthurian origins”