One of the best-known heroes in Norse mythology, Sigurd is better known as Siegfried from German versions of the legends, and his exploits and interactions – from killing a dragon and re-forging a mighty sword, say, to his relationships with his wife Gudrún, with warrior princess Brynhild and with a host of other personages – characterise him as much as they echo the exploits and interactions of other heroes in other times and cultures. Here Tolkien attempts a harmonisation of the various early tales, particularly those in the Poetic Edda, and versifies them in English as ‘The New Lay of the Völsungs’ (in ten parts) and ‘The New Lay of Gudrún’, using forms and alliteration modelled on those early originals.

This posthumous publication ought by rights to appeal to a wide range of readers, from hobbit-fanciers to Wagnerites, from poets to psychologists, and from medieval literature specialists to mythologists, but I suspect it will end up satisfying only those whose interests overlap a number of these categories; for any single one of those categories of readers it may well end up a disappointment. Many fantasy fans may well come with false expectations of more Middle Earth action or a tale compatible with the Ring Cycle; or they may vainly hope for more than just a pastiche of medieval poetry, however erudite, or a deeper psychological study of the motivations of the main characters; and knowledgeable scholars may like to be told more than they already know from Christopher Tolkien’s otherwise praiseworthy notes and editing. However, for those like me who just have a fascination with that certain mix of medieval legend, fantasy, character motivation and mythic resonance The Legend of Sigurd and Gudrún, complete with introductions and notes, supplies an extra dimension; all that is lacking is a selection of annotated colour plates of the medieval wooden carvings hinted at on the book’s cover and inside line illustrations.

Anyway, this reviewer enjoyed it, even if he did have to use two bookmarks to go from text to notes and back again. However, this method rather defeats Tolkien’s intention of letting a good story stand on its own feet, and in all fairness I should have read the poems straight though, aloud for preference, to judge its merits. Actually, mostly what it encourages me to do is to go back to the originals or related works such as The Saga of the Völsungs or The Nibelungenlied, albeit in translation. Tolkien worked on The Legend in the 1920s and 30s before abandoning it for original creations like The Hobbit and The Lord of the Rings; perhaps the majority of readers will principally judge this as preparation for the literary legacy he is best known for. 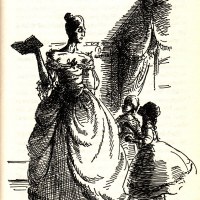